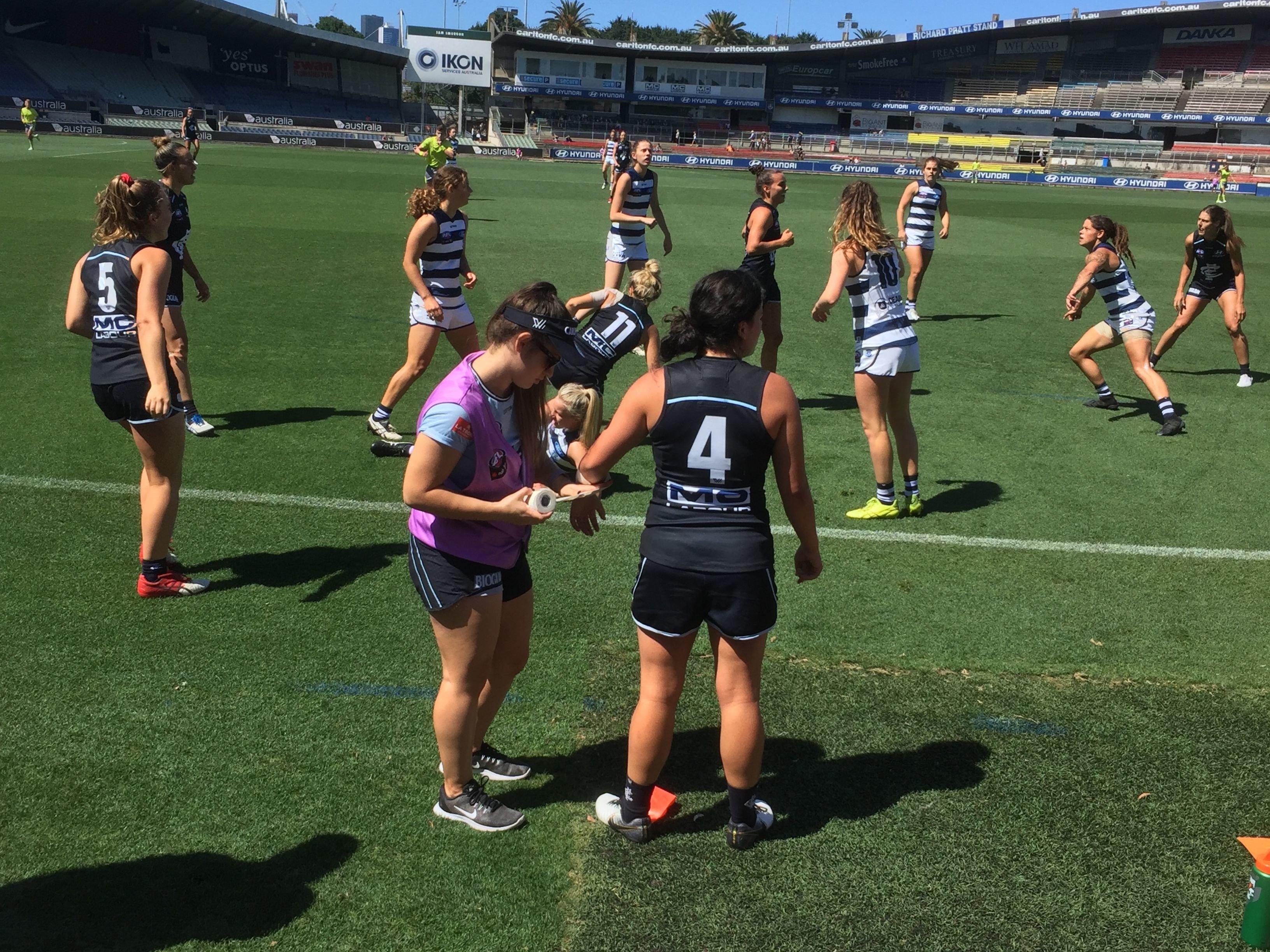 With season 3 of the AFLW now complete, we found time to sit down with Alphington Sports Medicine Clinic Physio Simone Muscat to discuss her involvement.

How and when did you become involved with the Carlton FC and AFLW?

My involvement with Carlton FC started with the Men’s team at the end of 2017. As a part of my Masters of Sports Physiotherapy I was offered an incredible opportunity to spend time working with the Carlton Men’s medical department preparing the athletes for the next season. My role during this time was to statistically analyse the athlete’s individual movement patterns and determine who was at highest risk of lower limb injury. We then intervened on these individuals with a tailored strengthening program.

A few months after I finished with the Men’s department, I was offered the position of Head Physiotherapist for the Carlton VFLW, and was later offered a position as Physiotherapist with their AFLW team. Being a part of the 2019 Carlton AFLW season has been an absolute dream and honour. I’ve loved every minute of it. At the start of the season there was a sense that I was part of something bigger than I could have ever imagined. And to have that realisation of just how big it was whilst walking out to a stadium filled with of over 53k people at the Grand Final; it was a moment that will live with players, staff members and myself forever.

Hands down the most enjoyable part of being involved with the Carlton AFLW has been working alongside the brilliant members of the medical and high performance teams. Close connections are formed between staff members and I’m lucky enough to be surrounded by an incredible group of people. In particular during the AFLW season, I spent the most amount of time alongside Riley Bodger (Head of Health and Wellbeing) and Damien Ryan (Osteopath). These two legends always make even the toughest of days enjoyable and I can’t wait to start preparing for season 4.0 with them.

Naturally with a new league there was always going to be challenges, and there certainly have been quite a few. Possibly the most challenging part of my job is knowing we could always do more for the athletes but we are unfortunately limited by time and resources. Similar to my colleagues at Carlton I was working between 65-80 hours per week by the end of the 2019 season. However, we are hopeful that resources will be available over the next 5-10 years within the AFLW to allow for funding of a full-time medical team for each club. We are looking forward to the day this happens with much anticipation!

It was obviously bitter sweet for the team (making it to, but losing the Grand Final) but an amazing season for the League as a whole. What are your reflections of the day?

It was definitely bitter sweet losing to Adelaide in the Grand Final, but honestly there was a sense of immense pride on the day towards each of the players and towards Carlton as a club. Although cliché, the players and staff are now bound by a special connection from that day and it made for such incredible memories. And unfortunately for us, Adelaide deserved to win on the day.

But overall, I have to say Women’s Football was the real winner that day. 53,034 people in attendance was a great result for the AFLW and hopefully going into the 4th season, there will be an even greater interest in women’s footy.

How did it feel being a part of the grand final; something so significant and special to so many people?

Words quite simply can’t explain how incredible it was to be a part of that day. However, for me it’s important to not lose sight as to why this is such a significant day to many others. The lifting up of the trophy means more to these women than just a win; it represents many years of determination, grit and personal battles that these athletes have struggled through to get to this point. And these athletes are not just doing it for themselves, they are inspired by the many women who were otherwise told that they were not allowed to play football growing up. And by the many children around them that now look up to them as inspiration and heroes.

The grand final provides a high level of exposure of the game that these women have previously not seen, helping to normalise women in this industry. This not only normalises the women on the field as athletes, but also helps to normalise women in roles such as Coach, Team Manager, Physio, and Strength & Conditioning. It was incredibly powerful to be a part of a day that highlights women in sport, and at the top of their game. Whilst there is quite some time to go before parity is achieved, every season feels like a step in the right direction.

How does this differ from other sports you are involved in / athletes you have worked with?

The two main sports I have worked in to date are Hockey and AFL (men’s & women’s). One of the main differences between these is that Hockey tournaments are run over 10-14 days, whereas AFL is a weekly game over a space of 8-16 weeks, dependent on the league. It can be challenging with hockey if an athlete competing three days straight sustains a mild injury on day one, the management of the player through the tournament is critical and fast tracked as recovery times are tight. In the AFL, injuries are managed with a more long term view where a few days off to assist in recovery can be more commonplace.

Another difference with these sports is the difference in attention from the general public and media. With AFL being our national game, there is a great deal more pressure involved in this sport with wide coverage via all forms of media. The uproar from the brilliant photo of Tayla Harris’ kick by Michael C Wilson certainly taught many of us (staff and players) the importance of mental and emotional wellbeing, and the importance of switching off from social media at times.

Often our patients at Alphington are presenting in the middle of their sporting season with an injury, wanting to play that weekend or compete at a major competition that month. The intense pressure involved at AFL level of ensuring your players are available to play week in/week out has certainly provided great individual experience that will further assist in my treatment of patients.

END_OF_DOCUMENT_TOKEN_TO_BE_REPLACED

Sundays (for the duration of our renovation)