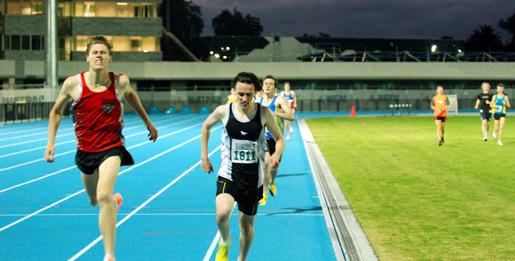 Alphington Sports Medicine's Mark Blicavs (pictured in the red singlet) has headed to Europe from ASMC to continue his dream of making the Australian Olympic Team. Despite a hectic and demanding schedule, he has taken the time to give us a valuable insight into how he balances his training with work....and some kind of a social life!

Who knew back then that the 6 months between October 2011 and March 2012 would be the most hectic and busiest my life has and quite possibly might ever be. Juggling two sports at elite level and working as a therapist at first was a challenge but a routine quickly formed and it hasn’t been that bad. Geelong has been extremely supportive of my goal to try and make the London Olympic Games (at first for the 3km steeplechase but after a bit of recent success, focus turned to the 1500m.) Alphington Sports Medicine Clinic were just as supportive, allowing me to cut back my days of work from Tuesday, Wednesday, Friday and Saturday to just Tuesday and Friday to allow extra training sessions (both Football and running.)

January/February was very busy with lots of travelling to and from states to compete in the National Track series (apologies to my Friday regulars.) These meets were build up races for the main part of the season which were the Olympic Trials held in Melbourne at the start of March. I raced well at the trials finishing 4th Australian overall but I still remain 7 seconds of the ‘A’ qualifier which doesn’t seem like much, but over a race that takes me only 3.43 minutes to complete, it’s a lot.

For 2012, my athletics has been my main focus but I have been able to get down to the Geelong FC a few times to participate in training and to keep them updated on my Athletics and for when they can see me ‘full time’ down at the club.

At this stage, the plan is to compete over in Europe around May – August to see how quick I can race before the June 11th cut off date for Olympic selection, then once back move permanently down to Geelong in an attempt to start a football career. But as things often don’t go to plan and things can change very quickly I might be down there sooner rather than later. This would most likely mean a finishing up as a therapist at Alphington Sports Medicine Clinic (at least for the moment)

An average week for me would normally look like this:

....Although this schedule is week to week and sounds hectic I still manage to fit in plenty of FIFA on the x-box!

I’ll try to keep everyone updated.

Thanks for all the support.