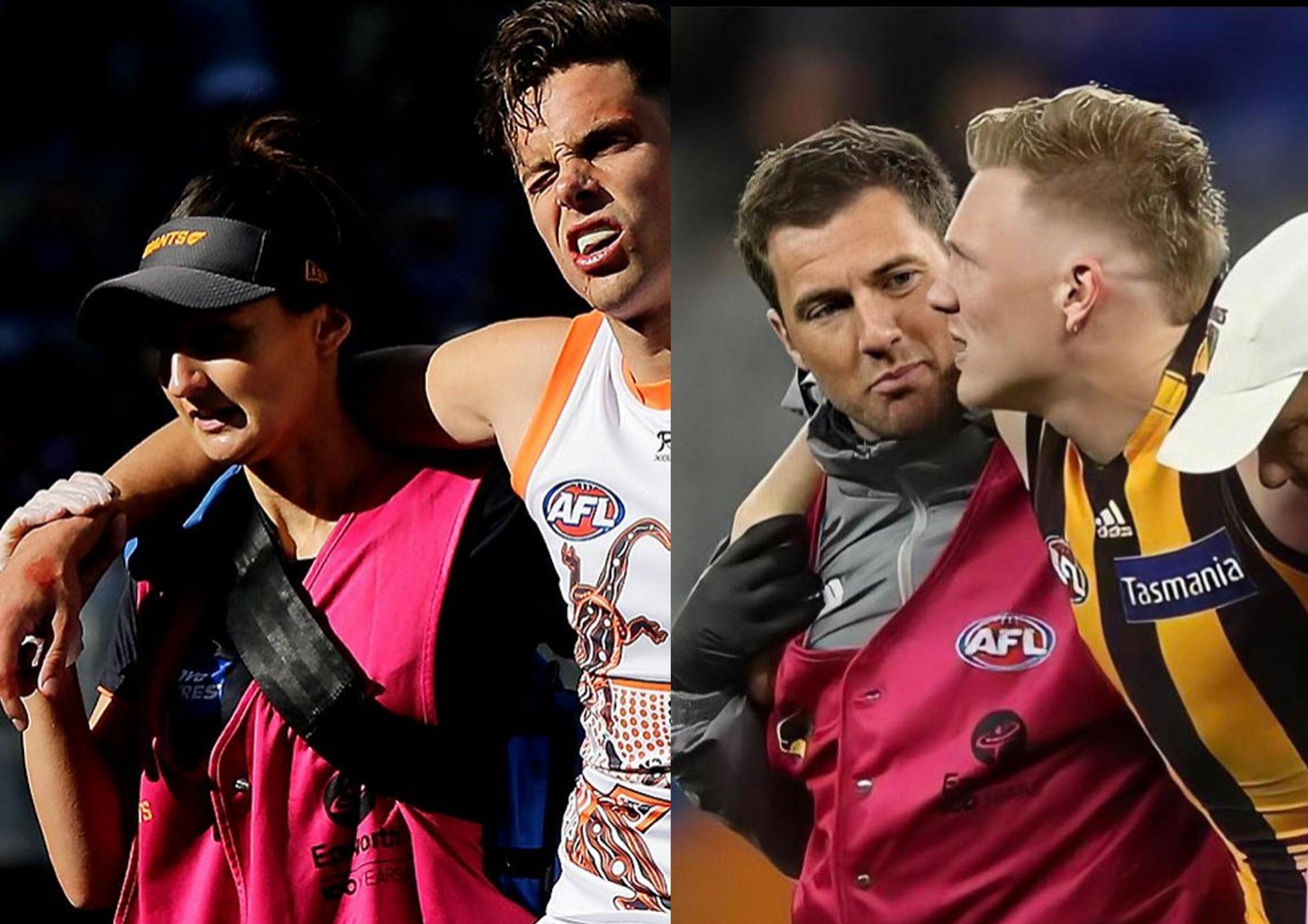 How and when did you become involved with the AFL and the Hawks / Giants?

LW: I came across from the UK in 2015 to further my skills in Sports & Exercise Medicine. As soon as I came across, I made the transition from working in Elite Soccer into Australian Rules Football. I worked through the VAFA, then VFL with Williamstown before being approached by Hawthorn about a joint role with Box Hill (VFL) and the Hawks at the end of the 2017 season – I jumped at the opportunity. Since November 2017 I’ve been in at the Hawks twice a week and covering an increasing amount of games per year. Alongside my AFL journey, in terms of footy involvement, I’ve worked in the AFLW as a medical consultant on game days and also covered the Victorian U16 State team.

KB: I have worked with AFL clubs since the 2014 season. This was initially as the VFL Doctor for the Western Bulldogs and later at the Geelong Cats and then Sydney Swans as their Melbourne based AFL Doctor. It was in July this year when the GWS Giants’ Doctors were unable to travel to their Perth hub that I was asked if I could help out. I then continued on with them to their Queensland hub and remained until the end of the season (which was shorter than we had hoped).

LW: I enjoy developing a balanced and dynamic working relationship with players & staff to ensure we can provide the best medical environment possible at the Hawks from a well-being, injury prevention, rehabilitation and performance point of view. On game day the pressure to make the correct diagnosis or management decision, whilst challenging, is something that I really enjoy.

KB: Working in an elite team environment is very rewarding and the Giants were a great club to part of. I was also so happy to be able to see my family and friends in Perth!

LW: The hardest thing is to protect the player from themselves or the coaches! As a medical team we are always being pushed to return players from injury as soon as possible – ensuring that “soon” is not “too soon” can be very challenging, especially if the team are underperforming and it is an important player!

KB: I always considered myself very fortunate to be in the AFL hub and out of Melbourne’s stage 4 lockdown. As most of this year’s AFL season was compressed, there was often a much shorter turn around between games and supporting players to get up for games was at times a race against the clock, especially when we were spending lots of time on the road. In one instance, we left our Gold Coast Hotel for Adelaide at 8:30 in the morning and didn’t arrive back at the Hotel until 2:30 the following morning and the following game was only 4 days away. It was busy, but very rewarding.

How does this differ from other sports you are involved in / athletes you have worked with?

LW: When working with the Diamonds (Netball) or Melbourne Victory (Soccer) there is certainly less pressure on game day as you are not allowed free access to the court/field to assess players – you must be invited on by the umpire/referee and the game is halted during your assessment. Not having 35 other players rushing around you whilst you are on the field helps! Returning track athletes to competition is even more difficult than in Aussie Rules – every time a sprinter competes, they need to be running at 100% so there is no half measures!

KB: The hub experience was unique for all involved and differed greatly from even a typical AFL season let alone my involvement with other sports or athletes. Last year I travelled to Budapest for the World Junior Championships with the Australian Swimming Team and whilst it was a great experience, working in team sports is what I particularly enjoy. In AFL, due to the nature of the game, it is common to see a broad spectrum of injuries, in particular we see a fair amount of traumatic injuries, these injuries are seen far more than in other sports that I have worked in such as in elite cricket.

It was obviously a unique (and unprecedented) set up for the AFL this season – how do you think the hub effected the players, club staff, and your work with them?

LW: It certainly was unique – I had to drive 10 hours from Melbourne to Sydney with under 24 hours notice to avoid border closures – if I drove for that far back in the UK I’d be in the sea!! Whilst it must be acknowledged that Victorian’s certainly had to do it much tougher during our time in the hub, compared to a usual AFL season it presented a variety of challenges. For the players, they were unable to escape each other and the coaches. The lack of down time to relax other than in the confines of a hotel room was obviously distressing for some. Many players & staff members were forced to leave loved ones back in Victoria and had to keep in touch with children via zoom, all whilst adapting to ever changing environments (the Hawks lived in 4 different hubs – Sydney, hotel lockdown in Perth & then the city centre, and finally Adelaide). But with adversity comes opportunity – given our close proximity there were great opportunities to develop new & existing relationships. In my role as HFC doctor, the short turn around between games made recovery, accurate diagnosis and subsequent rehabilitation of injuries more important than ever!

KB: For the most part, the players and staff were able to have a positive experience all things considered. Everyone was thankful that the season went ahead and supported each other really a great deal. The club arranged several social events and all meals were communal which made for a really enjoyable and welcoming environment. That being said, given the restrictions and living together so closely, it was harder for the players and staff to get time away from football to de-stress from the pressures of AFL. No doubt many of them (myself included) missed their families, spouses and friends. As the team doctor, it is our role is to support the players and staff along the way.

LW: Unfortunately for the Hawks, I got to manage some interesting injuries and these experiences will easily translate into better care for my ASMC patients. Also spending 24/7 discussing Sport & Exercise Medicine issues with some of the best minds in the business has certainly given me new perspectives on how to tailor treatments, in everything from Osteoarthritis to Exercise Induced Asthma, and all in-between! I look forward to using these experiences to help ASMC patients achieve their physical activity goals.

KB: Working closely with the Giants’ broader High Performance Team offered exposure to a great group of skilled professionals. It was a very collaborative environment, particularly when managing complex injuries and navigating the challenges of load management. I was very appreciative of the opportunity to work with such a skilled group whom I learnt a lot from.

For more information about Dr Liam West and Dr Kendall Brooks go to: