Dr Gaylene McKay - Working with the Opals at the Tokyo Olympics 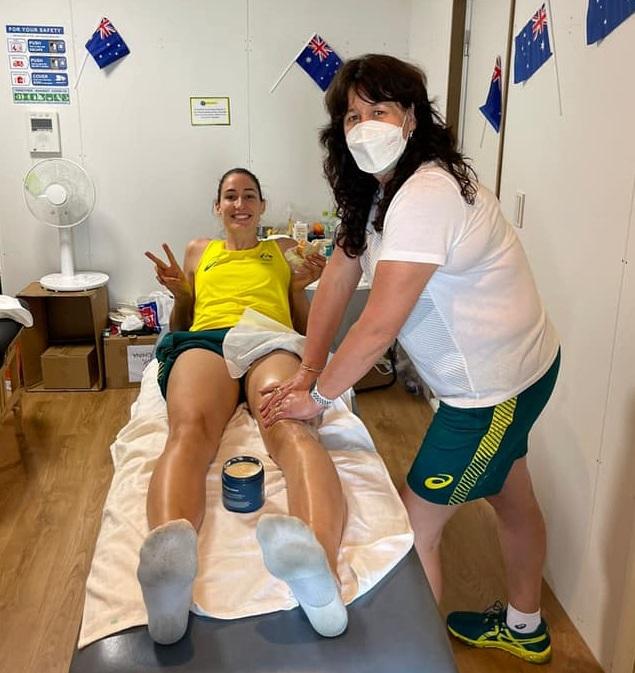 Dr Gaylene McKay has been the Opals (Australian Women’s Basketball Team) Physiotherapist for 7 years and travelled with them many times for camps and tournaments. But this year she had the privilege of supporting them in Tokyo for the 2020 Olympics!

Now that she’s back in Australia we asked her to spend some of her hotel quarantine time telling us a bit about the experience . . . .

How did it feel to go to the Olympics and support one of the teams representing Australia?

It was an absolute honour to go to the Olympic Games as the Sports Physiotherapist for the Opals. Along with that honour comes a strong sense of responsibility to ensure that everything is being done to physically prepare these elite basketball players to compete to the best of their ability in the Olympics.

What were the sporting facilities and the village like?

Wow, the basketball stadium was the most incredible first-class facility. It was such a shame that it could not house the spectators that it was planned to have. Unfortunately, I really did not get to see other sporting facilities firsthand as we were only allowed to go to the basketball stadium and then back to the village. Such was the way of the COVID affected Olympics.

As with all Olympic Villages, the large number of high-rise buildings housing the athletes and staff from so many countries is a sight to see. The road displaying the flags from all the competing countries gave a sense of how big the games are and standing next the Olympic rings in the Village was a surreal feeling!

The apartment style accommodation meant that my Olympic experience was shared with five others in my apartment and not returning to a room on my own. The beds were made of cardboard so they could be recycled after the games to reduce landfill – such a positive and very much the style of the Japanese.

The dining hall was the size of a large Bunnings on each of it’s two levels. The way the Japanese managed hygiene and COVID restrictions in the Village must be complimented. From my understanding no Australian contracted COVID whilst at the Olympics.

The Australian Olympic Committee had planned and worked tirelessly to make our Australian building within the Village our ‘Aussie Sanctuary’ - hats off to them for the brilliant job they did. There was a separate dining area with some of our favourite foods and a coffee cart that reduced the number of trips to the large dining hall. Large screens were set up for the Australians to watch each other’s performances and socialise/support each other.  And lots of artwork by Australian school children were displayed to remind us of home and the support we had from our country.

COVID restrictions aside, how did this competition compare to others the team has been involved in? What did you and the players do differently while there, and in the lead up to the Games?

It is hard to put the COVID restrictions aside, as it is these restrictions that made it different to other tournaments and Olympic Games. There was less scope to have training camps and international practice games to consolidate on team performance. There had to be some lateral thinking on how to prepare the team during these very different times.

The need to live in a “bubble” for about five weeks while there and then two weeks of hotel quarantine upon return was obviously very different to previous tournaments. The ability to take some time out was limited and any recharging or down time was still within the bubble. These circumstances were a test of resilience, and it was managed in different ways by different people. In general Australians are a resilient bunch and I think this showed through at the Olympics.

Many of the routines for game day preparation and recovery were kept the same as any other tournaments so that there was a sense of familiarity around the tournament play.  Although, these routines were peppered with new routines such as daily COVID tests, mask wearing, social distancing and all other things to reduce our risk of COVID.

Obviously not having crowds would have been strange, but was there a sense of comradery amongst all the athletes and support staff, within basketball and beyond, that still made it feel special?

To me, these Olympic Games seemed to be the Olympics of gratitude. They had already been delayed a year and there had been a sense of wondering whether they would go ahead. When they did go ahead there was a sense of gratitude that we were there and given the opportunity to compete. With that gratitude went the feeling that we just need to do what we need to do. There were little to no complaints about the daily COVID test and living in a bubble with a range of rules and regulations. There were wonderful displays of support and solidarity.

Not having crowds was different but was accepted and just became a way of life. We all cheered a little bit louder to support each other. With no family and friends at the Olympics all the highs and lows were shared both within our own team and by the whole Australian team back at the Village. There was a sense of camaraderie in team Australia that I feel may not be experienced again. I feel blessed to be a part of this history.

What was your highlight(s) of the trip?

The whole Olympic journey and experience was an absolute highlight that I will cherish forever. For a specific Opals moment, the game where they defeated Puerto Rico by the required margin to go through to the quarter finals was a time of great excitement.

For more information about Dr Gaylene McKay go to: https://www.alphingtonsportsmed.com.au/practitioners#dr-gaylene-mckay