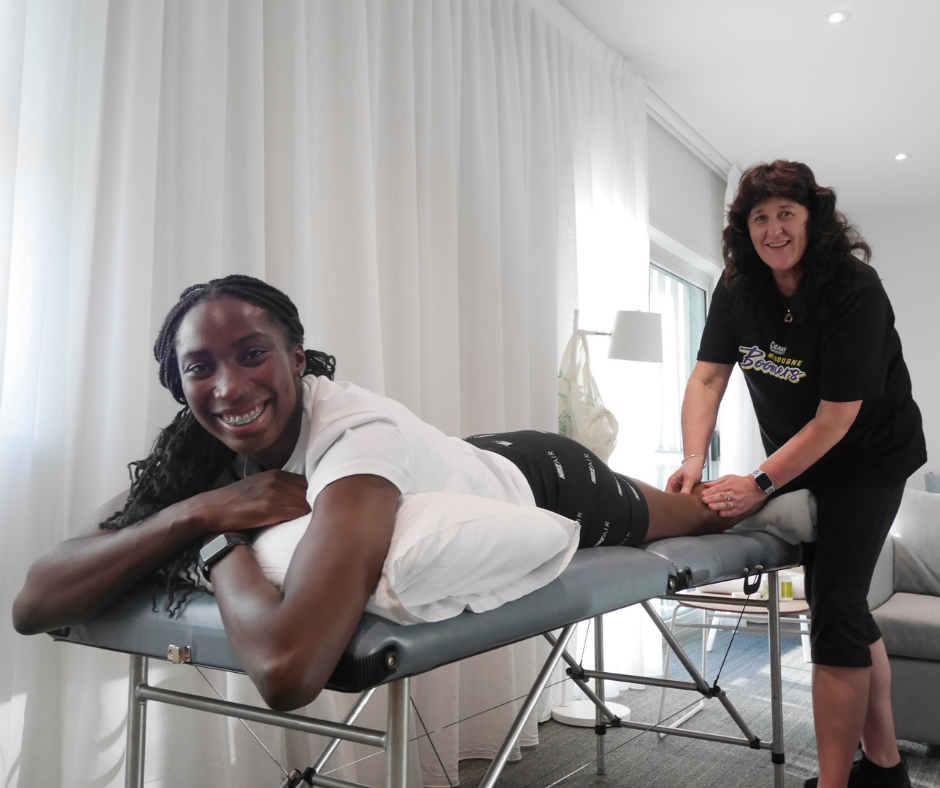 Alphington Sports Medicine Clinic's Managing Director Dr Gaylene McKay is no stranger to the rigorous demands of professional basketball – she played over 300 games in the WNBL and has been a team Physiotherapist since the early 1990’s when she retired.

She returned from the WNBL hub late last year and we had a quick chat about her time in Queensland with the Melbourne Boomers.

It was obviously a unique (and unprecedented) set up for the WNBL season – what impact did hub life have on the players, club staff, and yourself?

For the players from Melbourne there was not the usual pre-season on-court and strength and conditioning undertaken, everything was modified. So going into the season there was a focus on management training and playing time along with a lot of soft tissue treatment and monitoring. Load management was a major focus for the team to lead into the season as safely as possible.

In a “normal season” the players would go to training or a game and then go home to their own space and manage their down-time. In the “hub” we lived together in the same apartment blocks for two months and the normal down-time was not the same. Luckily the group got on well and it made for some fun times. It was like a road trip or a tournament, that would normally be 1-2 weeks, but it went for 2 months. By the time the season ended I think we were all exhausted and needed a well-deserved break.

There were some players and staff that were juggling their external work in the demands of the WNBL season.  For this group, including myself, the other work added to the already busy schedule.

Although these challenges were present, there was the unique opportunity to get to know many people both within our team/group and across the league better than if we had a “normal season.” There were many laughs and good times along with the challenges of an intense season.

What did you find the most challenging with you work during such a condensed season? And were there different kinds of injuries (than in normal seasons) for you to deal with?

The most challenging aspect of hub life was the time. There were time demands for a focussed and efficient recovery from one game to prepare for the next game, which could be 1-3 days away. This recovery cycle was then done on repeat for two months. The recovery took many forms including ice baths, food intake, recovery massages, injury treatments and recovery boots to name a few. For the coaches the time between games to scout and prepare the tactical approach to the next game was also undertaken in more rapid cycles than a normal season. It was at times like life was sped up!

Early in the season I believe there was an unusually high frequency of Achilles Tendinopathy as players returned to jumping/landing/change of direction, sprinting and defensive footwork at a higher volume and intensity. Overall, I think there were more overuse injuries than acute injuries during the season. I suspect the acute injuries occurred at their usual frequency and the overuse injuries at a higher frequency. With physiotherapists travelling with the team and working hard to manage these injuries, it was not often that these overuse injuries caused players to miss playing in games. So for the spectators on the “outside” there may have been little awareness of the injury concerns some players may have experienced.

What did you find most enjoyable and rewarding about the season?

The break from the “Melbourne lockdown” was truly appreciated. In Queensland we were able to move about without masks and go to cafes/restaurants more freely than when we were in Melbourne.

The camaraderie of travelling and working with a team is always a highlight and one of the reasons us sports physios do this sort of work.

Everyone working together to strive for the best results possible was rewarding. And I found the gratitude the players had for my work with the team was both rewarding and humbling.

Do you think this experience will change anything about the medical treatment you give to or the league requires for players in the long-term / for regular seasons?

I think all the WNBL clubs have an improved level of understanding of the value of recovery strategies in a season and I hope there will be a more comprehensive use of these strategies moving forward. As club administrators were often travelling with the teams they got a first-hand view of the role the medical team play in the player’s health and well-being. I think all the work we have done in the past has been appreciated, it is perhaps understood and appreciated at another level now.

Why was it important to have the condensed WNBL season, both for the players and the League overall?

The condensed season enabled the League to capture television coverage at a level never seen before in the WNBL. The League is of high calibre and that was showcased to a broader audience, which is great for everyone involved. I hope many of these new viewers will continue to follow the League in years to come and help it go from strength to strength.

For many of our elite basketball players the WNBL season was a valuable pathway back to playing at intensity to prepare them for the challenge of Olympic selection. It enabled the players to return to work and chase their passion and dreams.